Well hello there, friend! Long time no OvuSense review, eh? I can’t believe it has been 5 months since I wrote my last review for this contraption that is “according to their research” suppose to boost your odds of conception by leaps and bounds. In my defense though, four days after publishing that hilariously review (OvuSense Review Part 2: Oh No! Did It Get Lost Up There) my colon ruptured due to an infected diverticula and I spent my entire summer either in the hospital or on complete bed rest. Needless to say, OvuSense was not being used and Mr. Spermy was furthest from my mind. In fact, my trusty nightly companion was so far out of my mind that I forgot why I had even teased you at the end of my last review with the title, “Mr. Spermy Goes into the Trash!”

Because friends, as I held Mr. Spermy in my hands for the first time in ages, all of the intense emotions came rushing back to me as I remembered that one specific morning five months ago when I nearly lost my…

But before I tell you the reason I almost lost my….errr…cool…and Mr. Spermy was on his way out the door snug as a bug in a white kitchen trash bag with the words “good riddance” written on it, let me explain to you how OvuSense works.

First of all, you take the medical-grade sensor (which I have named Mr. Spermy because he looks like a giant sperm) and you insert it into your va-jay-jay much like you would a tampon. The sensor than stays in overnight as it records your core temperature while you snore, drool, and toss and turn all while dreaming of babies. In the morning after you wake up sad because the babies in your dream are not really your babies (some of you feel me on this one) you remove the Sensor and download its data to the OvuSense App. Once connected, the app then uses patented technology to predict and then confirm ovulation with 99% clinically proven accuracy! Crazy cool, right?

Until you can’t get your Sensor to download the information it collected. 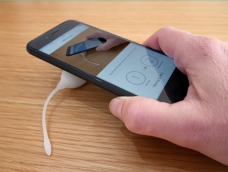 Y’all, everything was going honky dory five months ago until one morning I woke up, took ol’ Mr. Spermy out of his comfy home (aka…my va-jay-jay) and stuck it to the back of my phone (of course after washing him off first) for it to download his knowledge. Yes, you read that right; in order to download the information, you need to stick Mr. Spermy to the back of your phone (see picture). I know it seems kinda gross and if you are a “germ-a-phob” this might not be the device for you, but if you just don’t think about it, and you block out the thought of where it has been, it’s really no big deal. Or at least that’s what I tell myself. And I tell others when they ask to borrow my phone, or I give it to them to hold in order for them to watch a funny video or I request that they look at a Facebook meme I find hilarious.

On that early summer morning while still rubbing the boogers out of my eye, Mr. Spermy started to become defiant. Much like the middle school children I used to counsel back in my social work days. You see, I took Mr. Spermy and placed him on the back of my phone to only have the connection become “interrupted,” therefore not allowing the information to be downloaded. No big deal I thought as I then removed him from the back of my phone to try again. However this happened over and over and over again until after nearly 15+ minutes of taking it off, putting it back on, taking it off, putting it back on that it finally worked! Can I get a hallelujah wave offering?

Thank you! But friends, go ahead and put it down because guess what? It did it again the next morning. And then the next. And the next. I felt as though I had to not just find the “sweet spot” on the back of my phone, but also hold my tongue out, pat my head, rub my belly, and tickle my cat all at the same time for it to finally connect.

SO FRUSTRATING! And all this BEFORE my first sip of coffee. No bueno!

But because I am not one to complain, I just kept dealing with it. That is until one morning after wasting 42 minutes of my life (but who is counting) trying to find the “sweet spot” on my phone in order for it to connect and provide the VITAL information I needed, I contacted support and told them I was DONZO! Trying to conceive was already aggravating and frustrating enough. I didn’t need one more thing added to it. ‘Cause…let’s be real…when dealing with infertility…

But y’all, let me just cut to the chase and say that he never ended up in the trash and it’s all because of their awesome five-star customer service! I don’t remember our exact conversation but when I contacted them with my disappointment they suggested a few solutions that I couldn’t help but roll my eyes at because let’s be real, I had already tried every single one…including standing on my head while reciting the Lord’s prayer. And I let them know this in my “not-so-sweet” voice. But to my dismay, they validated my frustration and without hesitation offered to send me a new one within a day.

Can I get another hallelujah wave offering?

And this time go ahead and keep it up because everything is unicorns and rainbows again! I haven’t had to stand on my head, pat my head, rub my belly, tickle my cat, find the “sweet spot” or recite the Lord’s prayer in order to get my sensor to work. I am instead pleased to report that every night Mr. Spermy does his job collecting the information needed and every morning he does it again as he shares it without any connection issues. But in the event that he does start acting like a fool again, I will simply contact customer service in confidence that the issues will be resolved. And resolved quickly.

My whole point in wanting to write this post is not to gripe and complain about Mr. Spermy not wanting to connect, but to brag and rave about how helpful customer service was to me even when I wasn’t bragging and raving about their product.

I also wanted to point out that it’s not just me who the OvuSense Support Center bends over backwards for, but many others who have from time to time expressed in the closed OvuSense Facebook group their same concerns regarding their device also not wanting to connect (which I later learned was due to a bad batch). I loved reading how each person within the group who voiced their frustration was treated with respect and ultimately sent a new device.

So friends, if you are on the fence about purchasing your own Mr. Spermy because you fear it will break or won’t work properly, thus wasting hundreds of dollars, please know that the OvuSense customer service department is amazing! They will do anything and everything to make sure that you always have a working device in your hand…err…va-jay-jay…because they know that your goal is getting pregnant. And their goal is the exact same.

To snag 20% off your purchase, use BABYBIRD as a coupon code.

If you have any further questions regarding OvuSense, please feel free to email me at 10hopeingod@gmail.com. I would be more than happy to tell you my experiences in an honest manner. If there is one thing you should know about me it is this…I am truthful. I am blunt. And I am always, always willing to share my “I will hold nothing back” opinion with you.

To read part one of this review series titled, “I Am to Put This Where?!” click here.

To read part two of this review series titled, “Oh No! Did It Get Lost Up There?!” click here.

I would love to get connected with you on a more personal level, so if you liked this post, pass it on. Then click here to find Waiting for Baby Bird on Facebook, or come follow me on Instagram @waitingforbabybird. I can’t wait to “meet” you!

23 thoughts on “OvuSense Review Part 3: Mr. Spermy Is Going into the Trash!”